On a Saturday night in June (June 30th to be exact), my wife and I traveled to Coventry’s Wood St Field to watch our local Little League®, North Kingstown Wickford, play their first 12U district tournament game.  This was the second year for me writing about the district tournaments for the RIBBE, and I was writing about the NKW team and their chances of going to the Little League® World Series in the weeks leading up to this game.  NKW had a great attendance of fans, league executive board members (such as myself), and families on hand to support North Kingstown Baseball.  When I arrived, the score was already 5-0 in favor of Coventry.  In took me, having watched baseball for close to 40 years, only seconds to realize how good Coventry was.  Their pitching was crisp, their hitters connected with power and force to the baseball, they made every possible defensive play.  In the end, Coventry defeated North Kingstown Wickford 8-0 to start their run to South Williamsport, PA.   A run every Little League® team from Honolulu, HI to Portland, ME dreams about.  A run to the Little League® World Series.

Coventry mowed down the District 3 competition.  To be fair to the other teams in the district, they were overmatched by the pitching of Mather, Turner, and Lama game after game after game.  Your team could not catch a break with any of those incredible arms on the mound.  And power at the plate, home runs, doubles, runs scored.  Coventry claimed the District 3 Championship by sweeping all 5 games in the tournament by a combined score of 46 – 2, against the best players in the entire 12U District 3!!!

The State Tournament, held in Slater Park, Pawtucket was the site of the next round for Coventry Little League.  Once again, Coventry proved to be the elite team in the tournament by defeating the likes of Cranston West and Lincoln.  You could see the momentum gathering for Coventry in the State Tournament.  Players, coaches from all over RI started sending me messages and emails about the pitching, the timely hitting, the never quit attitude, the overall professionalism of these 12U players.  Everyone in the state of RI felt that Coventry was the team to beat not only here in RI, but in New England.  The road to South Williamsport, PA was becoming much clearer for Coventry.

By winning the state title, Coventry was now headed to Bristol, CT for the New England Little League® Championships. I had an opportunity to go to the first game of the tournament with my sons, and that was a great memory for me.  In that first game, Turner pitched a perfect game and Coventry, now Team RI, defeated Team CT 10-0.  I got some amazing photos of the field and got to meet a few of the proud parents of the boys.  Brothers and families members held up signs, parents cheered at the top of their lungs, and Rhode Island was now getting national recognition on ESPN for their play on the field.  One more victory, then a defeat vs Team MA put our Team RI on a game by game basis.  Win and we are in, lose and we are out.  Team RI did win, and come from behind to win, and ultimately come from behind again to win beating Team MA, their only defeat to that point in the summer tournaments, to advance to the Little League® World Series in South Williamsport, PA.  The kids cheered and screamed and jumped up and down. And we, the baseball community of Rhode Island, joined them in celebrating their victory.  Their ticket to the most incredible accomplishment in Little League® baseball had been punched!!! 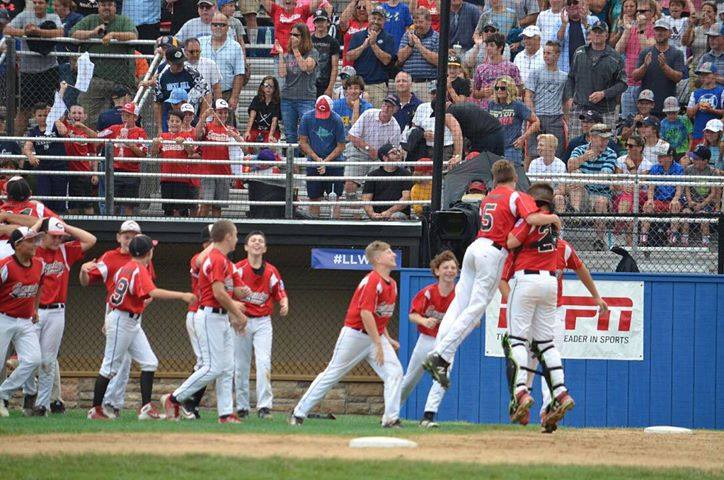 Coventry Little League parents and coaches along the way have been sending me updates, photos, and posts about the team.  Their player’s state of mind, what they do on their off days, just interesting tidbits about their players.  I posted these on Facebook and each post received hundreds and hundreds of views, likes, shares, and comments.  It has been great getting to know these parents and coaches this summer. Thank you so much for taking the time to write me and text me photos and updates so I could share them with all of our RI baseball community.

Little League® organizations from North Kingstown to Woonsocket to Warwick to Barrington sent well wishes.  Local businesses held fundraisers and posted signs.  Local media coverage picked up and Coventry Little League was now on all of our local radio and TV channels with updates.  The networks of ESPN covered games and showed highlights.  Coventry Little League, Team RI, Team New England was one of 8 teams to make the Little League® World Series.  8 teams out of literally thousands upon thousands of teams in the United States make this tournament.  And Coventry, RI was in. What an accomplishment. 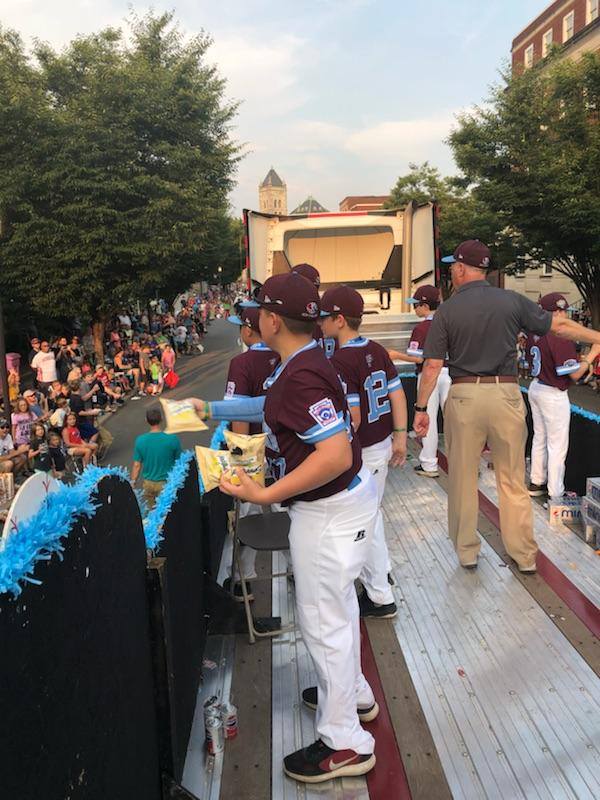 I could finish this post about the results to date, but I feel the results are not the story here.  Yes, Coventry dropped its first game to the Southwest team.  Yes, Coventry finished play in the Little League® World Series last night by falling to the Midwest Team.  Yes, Coventry will have one more game, albeit a consolation game, before heading back to Rhode Island.  But to me, the story is not over for Coventry Little League.  The feeling of riding on a float in front of 45,000 fans in the Little League® parade is priceless.  Proudly holding the banner showing “New England” in front of a packed stadium of fans, players from all over the US and the world, proudly representing Coventry, RI is something these players and coaches will never forget.  The hugs and high fives and screams you yelled every time a player, your teammate made a great play or got a hit or struck out a batter could be heard all the way across the country and certainly here in RI.  The feeling of making it to the most improbable spot on earth for a Little Leaguer, the Little League® World Series will never, ever go away.  Your run, from a game results standpoint, is over.  But your run as Team RI, Team New England, the champions of RI will never be over.  You will relive these memories and cherish every second of this summer for the rest of your lives, as will your parents, your families, your fans, and all of us here in the RI baseball community. 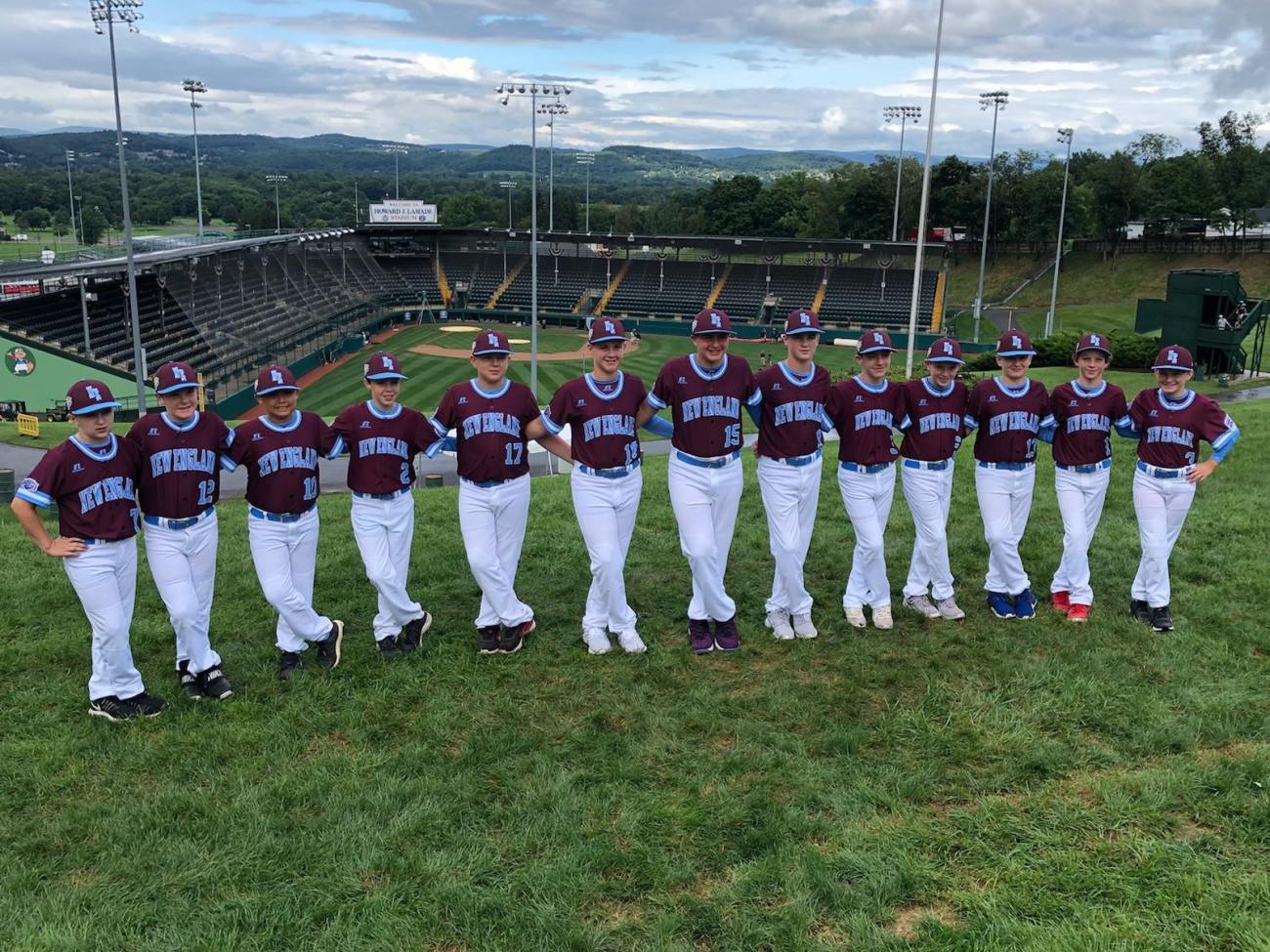 Thank you to the Coventry Little League organization for providing all of us RI baseball fans with something to cheer about this past few months.  It has been so exciting to watch this team make it to the pinnacle of performance for a Little League® organization.  Great job by the coaching staff, the players are incredible, just a joy to watch and write about.