Skip to content
On a recent trip to the Pawtucket Boys and Girls Club, I photographed two fields and posted the photos on social media.  One of the fields caught the eye of a Facebook member who messaged me “Hey that’s where the Slaterettes play, you should do an article on them.”  I was intrigued and followed up with that poster, who led me to Deb Bettencourt.  Deb is the player agent for the Pawtucket Slatterettes Girls and Womens Baseball League.  I mentioned to Deb that my elementary school teacher was Wilma Briggs, who was a member of the All American Girls Professional Baseball League and then we started a fantastic dialogue about girls baseball, the legacy of the Slaterettes, and why crying is allowed in baseball.  Here is an excerpt from our conversation.  And following our conversation, there are some links so you can learn more about the Pawtucket Slaterettes Baseball League.

RIBBE – Ever play versus other leagues with mixed boy/girl teams or even all boys teams? If so, what was the experience like? Would you promote those types of games?
Deb – We have not played against boys’ teams or even mixed teams within our league.  We did have a travel team that went to San Diego in 2016 to take part in MLB’s All Star Youth Classic.  Ours was the first all-girls team to be invited to that event.  The girls had a great time both on the field and off.  It was a once in a lifetime experience for them.  That being said, even though I am open to the idea of these types of games, I would say that it would have to be a match up with one of our travel teams rather than just let them into our regular division play.  One thing that we have noticed over the years with girls that transition from boys baseball into our league is that they are often a year or two ahead of our players skills wise.  That is not meant to say that our players are inferior in any way.  It is just that many girls who have been able to survive in a boys’ program have done so because they have had to push themselves to be stronger than they might have surrounded by players of the same gender.  This is where having the flexibility of letting a player up into an older division comes into play for us and allows us to make decisions with the best interest of the player in mind.
RIBBE – What influence do/does the previous generation of Slaterettes have on this generation of girls? Do they continue to coach, be involved in the league? Anyone or persons that you would like to recognize for the article?
Deb – While we thank our parents every chance we can get, it is definitely the previous generations of Slaterettes that keep the spark alive for these girls!  They coach, join the board and recruit!  Our adult players often come back and coach the younger players.  I think that is something really special because the players look up to them and hope to play as adults themselves someday.  I also appreciate that it takes the pressure of parents who feeling like they need to coach their child’s team.  As a parent myself I can really appreciate just being able to sit in the stands and watch a game.  We are always open to having coaches come in from outside of the league too.  It always nice to see different coaching styles.  And, of course, background checks are required. I can’t think of any other time that our Board of Directors has had so many former players on it.  Fifty percent of our current Board is made up of women who played in the league as children:
• Obviously myself as Player Agent.
• Sarah Feeley is our President.
• Tina Trahan is our Recording Secretary.
• Bethanie Rado is our Instructional Division Director.
• Dari DiTusa is our Women’s Division Director.
• Becky Estrella is our Uniform Manager.
We also have two people that joined the league as players after watching their daughters play for us: Vanessa Menard is our Vice President and Shannon Dos Santos is our treasurer. And as I mentioned before, the Slaterettes DNA is strong in our league!  Whenever someone gets pregnant we always wait anxiously to find out if it’s going to be a boy or a future Slaterette!
RIBBE – Do you play your games on the Pawtucket field next to the Boys and Girls Clubs? Where else do you play games?
Deb – One thing worth mentioning though is how that field has changed over the years!  When I played there in the early to mid-eighties there were just 2 fields down there.  That was it.  There were no restrooms.  We had to run up to the Boys Club in between innings (it wasn’t even the “and Girls Club” then!)  The field got a huge facelift around the same time that McCoy Stadium was renovated in the late 90’s.  The lights that are used at the Boys and Girls Club fields came from the field that used to be behind McCoy Stadium.  Our biggest wish list item would to be able to get lights at Seastrom Field in Slater Park.  We often have to end those games early due to darkness.  As nice as it is to have that field all to ourselves, the lack of nights on this “forgotten field” is disappointing for our players.  If we played anywhere else in the park we would have lights. 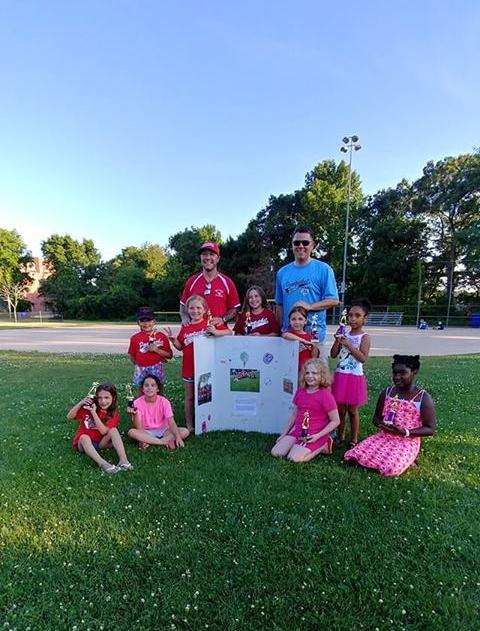 RIBBE – Do you see a void in interscholastic sports in terms of girls being invited or accepted to try out for baseball? We have had a number of fantastic girl baseball players over the years who I was sure could make not only the middle school here in North Kingstown, but the High School team. But I did see them years later just playing softball.
Deb – I wouldn’t say that we’ve seen a void here in the Pawtucket area.  If a girl has wanted to try out at Tolman, Shea or even Davies, I have yet to hear of them having a problem doing so.  We are known enough around town that athletic directors know we are the real deal.  As far as them ending up playing softball, we see that all of the time too.  I have seen some of our best players go on to play softball in high school and in many cases that is really about looking for college scholarships. Then they go off to college and play softball.  Then they graduate and come back to baseball.  It happens all of the time for us.  I would never try and talk a player out of playing softball if that were the reason.  I work in higher education and I see the kind of debt that students graduate with.  If softball can help cover some of those costs for them then I am all for it…until girls and women’s baseball is taken more seriously and we start seeing it offered at the college level!
RIBBE – What would you say to a parent whose girl is on the fence about either playing softball or baseball?
Deb – Well, obviously what I’ve previously said about playing it at the high school and college level.  However, if you asked me about it at the youth level, especially here in RI where there is access to an all-girls league, I would say let them try both and decide for themselves.  Baseball and softball are two different sports for sure, even though there are a lot of people that would argue that.  I have played both and I just happen to have a love for baseball.  It is different for everyone but unless you have actually tried both, how can you be sure?  If there is ever a parent that has a daughter that wants to try baseball, they should call me.  We can get them to a practice or a try out and spend some time with them and see if it is a right fit for them.  One thing that every female baseball player will tell you is how annoying it is when you tell someone you play baseball and they say “don’t you mean softball?”  As if we wouldn’t know what sport we played!
RIBBE – The grip on the baseball is physically different that one on a softball. Can you work with a girl who was raised on softball to help adjust the grip to conform to the smaller baseball?
Deb – I have seen women play a baseball game at 5:30pm and be playing softball later in the evening!  It can be done!

RIBBE – Are there moments, kids, memories that just warm your heart every time you are reminded of them? Would you like to share any of these with the article?
Deb – When I aged out of the league at 18, I immediately started coaching tee ball and have been doing that for over 25 years now.  There are so many kids that have left impressions on me! I still have every card that I was given, every picture that was drawn, every stuffed animal I received and so, so much more!  The only stuff that I do have to throw away at the end of the season are the dandelions!!!  The girls will gather up handfuls of dandelions before (or even during) a game and bring them to me as if they were a dozen long stemmed roses!  They all go into my baseball bag until the end of the season when I have to empty out the withered remains.  There is a quote that escapes me at the moment but basically it says that years from now kids won’t remember the score of the game but they will remember the time they laughed so hard that juice came out of their nose (loose translation!)  I’ve never had that happen to me as a coach but we have had silly string battles on the field, thrown water balloons instead of baseballs and broken piñatas with baseball bats.  Those are the things I remember most and that I hope my players will look back on fondly someday.  And now, thanks to social media, I get to watch them grow up into adults!  Many of my first players all have their own kids now!
I want to thank Deb Bettencourt for her incredible answers.  So well thought out and so informative.  I really learned a lot about the Pawtucket Slaterettes Baseball League.  It was a pleasure interviewing you and having the opportunity to write about your baseball league.  The Pawtucket Slaterettes – an Awesome Rhode Island Baseball Experience.

Photos courtesy of Deb Bettencourt and the Slaterettes Facebook Page